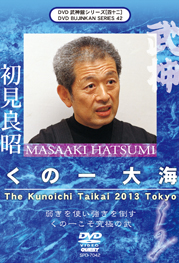 The Kunoichi Taikai 2013 was held in Tokyo on March 22-23.This was the second Kunoichi Taikai.The first one was held in Hanover in 2010.Kunoichi has been well known as a female Ninja.Many Kunoich from all over the world took part in the Taikai.
Hatsumi sensei learned Kunoichi techniques from Takamatsu sensei. ''We arrive at the field of Kunoichi in the end.Kunoichi is the absolute Bujutsu'' Takamatsu sensei transmitted these words to Hatsumi sensei. Bujinkan reached the highest level of martial arts.Complete coverage of the seminar. Using no technique so that the opponent can't avoid it.